We have proudly joined the woke lawn sign brigade. Designed by Gilda, our sign displays an illustration of eight children of various ethnicities next to a Martin Luther King Jr. saying, “Injustice Anywhere Is a threat to Justice Everywhere.”

Presidential adviser and not-too-secret white supremacist Stephen Miller notwithstanding, Jews have been at the forefront of civil rights activism. We believe in the legitimacy behind the Black Lives Matter movement but have been repulsed by the open antisemitism and anti-Israel stances of some of its leaders and followers, made all the more reprehensible by the organization’s failure to call out repression and discrimination common in Arab Moslem lands.

Our sign already has won approval from neighbors. We’re at the end of a cul de sac so the sign will get limited exposure. But it’s the sentiment that counts, not the number of eyeballs that see it. 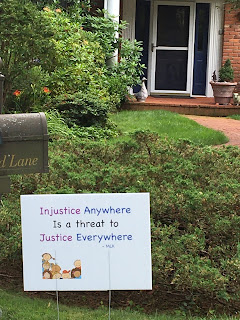 Petty President: The pettiness, the mean-spiritness of Donald Trump continues to know no bounds as it continues to amaze. His latest denigration of the office of the president involves the removal of the official portraits of Bill Clinton and George W. Bush from a public viewing area and their placement in a non public room of the White House.

He couldn’t remove Barack Obama’s portrait because it has not been officially unveiled in deference to the longstanding animosity Trump has toward his immediate predecessor.

One has to wonder how Trump will be treated by his successor, an especially trenchant thought if it is Joe Biden in 2021 or a different Democrat in 2025. Will he be invited to ceremonial functions? Will he be shunned by the members of the exclusive Past Presidents club?

Will foreign governments welcome him, not that he was an avid jet-setter before his election? As he was not overly complimentary to most foreign leaders while in office, his options for frequent flyer points are limited. Okay, he could visit Turkey, Russia, Brazil. And Israel. Perhaps his good buddy Kim Jong-un will invite him to a deeper visit inside North Korea. Or Xi Jinping might want to show him China’s biological warfare labs that Trump is always talking about.

Will He Take the Shot? Should an anti COVID-19 vaccine be introduced while he is still in office, will Trump display presidential leadership by publicly taking the shot, or will he punk out and reinforce the cautionary call of the anti-vax brigade that rejects all types of inoculations? Perhaps he will claim an exemption to the injection because of a flareup of his bone spurs.

The current fight over wearing a mask to contain the pandemic’s spread will be child’s play compared to the opposition anti-vaxers will wage, especially if anyone administered the vaccine becomes infected (https://nyti.ms/2OAxMM1).

It is truly a sad time when the health care system once touted as the best in the world has become a shell of its former prominence.

Feds vs. States: Where does federal vs. state responsibility begin? States’ rights vs. federal authority.

During the coronavirus pandemic, Trump has chosen to push responsibility for containment of the virus to governors, except when he sees political gain advocating opening up the economy and schools. He is trying to strongarm states to do his bidding even as case numbers and deaths rise. But his bottom line is that states, not he, are responsible for the pain the country is experiencing.

On the other hand, having clearly lost his bid to be a successful wartime general in the battle to beat COVID-19, Trump has shifted gears to be the law and order president by sending in federal troops to Portland, OR, to arrest and control Black Lives Matter and related protesters. No state or local official asked for federal troop assistance. Indeed, they have vociferously rejected their presence.

But Trump doesn’t care because this narrative fits the image he wants to project to his base and to voters who might feel threatened by the protesters.
Posted by Murray at 5:35 PM