49 Years and Going Strong Despite Snow

It snowed Sunday evening January 28, 1973. Forty-nine years ago. The night Gilda and I wed.

Not a major snowstorm like that expected tonight into Saturday. Just a few inches. I don’t remember the forecast calling for snow. Shortly after midnight when Gilda and I left the Madison Jewish Center on the corner of Nostrand Avenue and Avenue P in Brooklyn, we were surprised by several inches of snow on the ground.

For someone who prides himself on remembering fine details about events, I have little recollection about the affair. I do recall that the venue had only one ballroom so the cocktail hour and the dinner were held in the same area before and after the ceremony in the chapel.

During the ceremony our three-year-old nephew, Andrew, stood before the chuppah and mimicked the rabbi and cantor as they recited the blessings. His parents, Gilda’s sister and husband, were powerless to cut off his joyful dancing. They were standing next to us under the chuppah. His antics didn’t bother Gilda or me.

I fruitlessly searched for wedding memorabilia over the last few days. Did we save a menu? Did we serve stuffed derma, more ethnically called, kishke? Almost all Jewish weddings and bar-mitzvah celebrations, at least those hosted by families descended like ours from Ashkenazi European Jews, featured this textured blend of pureed vegetables, flour and oil (or chicken fat) which, back then, was cooked in thin plastic tubular casings rather than inside beef intestines as the original recipe prescribed.

I hadn’t eaten kishke in years until a few weeks ago when Gilda prepared some from scratch. It was delicious.

Gilda and I cannot believe 49 years have gone by. We think we’ve hardly changed. Here’s how we looked that night: 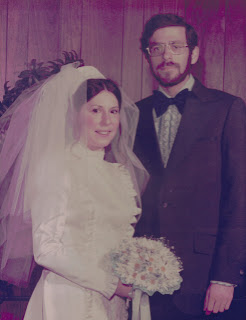