Baseball season has started, as has my months-long annual entry into afternoon bachelorhood. It is just by coincidence that my pm bachelorhood overlaps my dedication to the New York Yankees, though most of their games are scheduled for nighttime viewing (I generally watch just a  few innings while cleaning the kitchen after dinner).

No, my afternoon bachelorhood is an outgrowth of Gilda’s preoccupation with her garden. It is not unusual for her to spend six hours a day weeding, pruning, caring for vegetables, shrubs and flowers.

Gilda’s garden is nothing to sneeze at (as the accompanying picture of a fraction of her toil reveals), though her proximity to plants and assorted greenery no doubt contributes to some of her allergies. 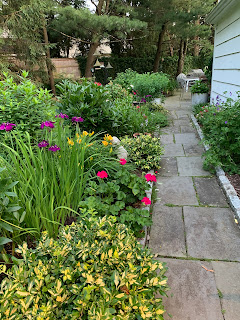 As if her intensity for gardening were not sufficient to keep me lonesome, she has embarked on a two-year course of study to become a Master Gardener Volunteer under the auspices of the Cornell Cooperative Extension of Westchester. I can’t really complain about that as I suggested that to her when she began her retirement three years ago.

It’s a good thing I’ve taken up Pickleball to keep me occupied, especially once outdoor courts become available in a few weeks. My Achilles tendon injured a month ago is still sore but I’ve begun tenderly playing again with the perhaps misguided hope of not incurring further degradation. For the record, and much to Gilda’s annoyance, I wore a walking boot for just a few days. Even more annoying to her, I have not overly stretched each day as per doctor’s instructions.

Just in case, I have not put away the walking boot. It stands in a corner on my side of our bedroom.

Word Play: You might have noticed fewer postings from me lately. A key reason is Wordle, or to be more precise, Word Guess, a Wordle knockoff that offers unlimited daily word challenges compared to Wordle’s once-a-day contest.

I usually am up at midnight when the new Wordle quiz becomes available. It takes but a few minutes to solve. My success rate is 99% of 90 games played; my best consecutive streak is 78.

My craving for word challenges not fulfilled by just one Wordle a day, I wind up logging onto Word Guess where my success rate is 98% of 275 games played (Word Guess doesn’t track streaks).

How is all this word play limiting my writing? Many of my posts were written on my iPhone in the wee hours of the morning. Instead of putting thoughts into bytes for posts I am exercising grey matter figuring out five letter words. By the way, I do not employ a trick starter word with three or four vowels. I choose words at random, often with just one vowel.

Gilda and I are among the fortunates. We live comfortably in good health in retirement. We enjoy each other. We share values and most interests. We have good friends.

Sure, our travel and entertainment options have been stymied by Covid. Gas costs more, as do most if not all of our daily expenditures.

But if we’ve learned anything during the last few weeks from pictures and accounts of inexcusable, unjustified, inhumane carnage in Ukraine it is that we in the United States have it easy. Even those struggling at the lower socio-economic rungs of our nation have lives more secure and full than Ukrainians now endure.

Several newscasts have shown American motorists willing to pay more at the gas pump if it will help Ukraine and the democratic West stifle Vladimir Putin’s invasion. It makes for a sympathetic sound bite.

A CBS News/YouGov poll recently reported that 63% of Americans said they would “continue to support sanctions on Russia’s oil and gas even if U.S. gas prices go up.” Thirty-six percent said, “No.”

The true test of American mettle will come in the weeks and months ahead. How much resolve will we truly have? Long term, will we match the courage and backbone Ukrainians display to stand up to Russian aggression? Or will our consumer driven economy and entitlement mindset undermine our response?

“Instead of complaining about gas prices going up, try feeling grateful that you aren’t sitting on a concrete floor in a train terminal, holding your cat, wondering if your home and everyone you love has been blown to bits.”

Forgive me, but perhaps because of my training as a journalist or maybe it’s inherently part of my makeup, I am generally a pessimist when I appraise my fellow Americans. We have truckers threatening to barricade access to our capital over mask requirements. One wonders how residents of Kyiv or any Ukrainian community view these protests. Would any of these truckers consider swapping their so called “infringed liberties” for the dictatorship Putin has imposed in Russia and seeks to implant in Ukraine?

There is no doubt higher gas costs and higher inflation are hurting the needy far more than the upper classes. Republicans are wasting no breadth in blaming Joe Biden for these financial woes.

Of course they disavow any responsibility. But a recent Facebook post from Occupy Democrats puts the issue into context:

“I don’t like paying higher gas prices either, but it’s incredible that people will buy the Republican Party outrage on gas that’s $5 instead of $3.50 – but then excuse Republicans for keeping the minimum wage at $7.25 instead of $15, insulin at $1,200 instead of $35, and paid leave at 0 weeks instead of 12 weeks.”

“Many people don’t realize this, but because of historically strong economic growth & policy choices, the deficit last year actually fell. By $360bn. AND, Maybe even more surprising, we’re on track to see the federal deficit fall by >$1T this yr, the largest nominal decline ever.”

You can bet the mortgage the GOP will stress Hunter’s laptop and Joe Biden’s complicity with his son’s dubious activities. It will be the equivalent of the Hillary and Benghazi saga if Republicans take control of either chamber of Congress. Hearing after hearing after hearing. Impeachment of Joe Biden if they win the House.

With no legislative agenda to control inflation, deal with Russian aggression, fix our dilapidating infrastructure, stifle domestic terrorism, continue fighting COVID and a myriad of other pressing issues, Republicans will simply occupy their time trying to topple the president in what they will perceive is payback for how Democrats treated Donald Trump.

And now a few words, courtesy of Chris Rey, about the slap heard round the world and its importance to America::

“The thing we all have to remember about Will Smith and Chris Rock is that Clarence Thomas’ wife tried to overthrow the U.S. government.”

Final Thoughts: A poem from Art Smith on Facebook:

Woke up warm and safe in my bed,

While someone else heard bombs over their head.

I jumped into a nice hot shower,

While someone else has lost all power.

I hugged my family, we were all together,

While others said goodbye, possibly forever.

While I fear the money that I will spend,

Others worry of losing the country they defend.

In the time it took for me to write this post,

Many have lost the things they love the most.

So, when I start to bitch and want to complain,

I will stop myself and pray for Ukraine.