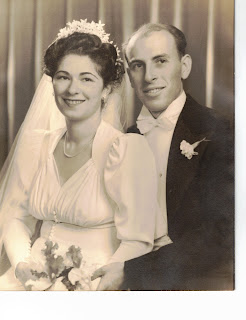 Eighty years ago this day, September 6, 1942, Sylvia Margarite Gerson married Kopel Fuersetzer. The first of two of her three sisters to marry, my mother was 25. My father, six years older. They lived together for 53 years. Sylvia died in 1996. Kopel passed in 1998.

They knew each other a scant six weeks before taking their vows. Two of those weeks they were apart, Sylvia on vacation. It was a pattern of separate vacations including trips by each to Israel, Europe, Japan, California and Florida that often played out during their married life as they worked together in a family business that could not sustain keeping their factory closed long enough to accommodate joint pursuits of pleasure.

Two months after their marriage, Kopel was drafted into the U.S. Army. He never saw combat. He received a medical discharge eight months later.

With his return to New York, the couple began their life together in earnest. One of the first orders of business was a name change. Through several iterations Fuersetzer evolved to Frost (my brother Bernie’s initial last name), then Forsetzer (my sister Lee’s birth name), then Forseter (my family name at birth).

My parents provided their children a fulfilling life in our attached row house home in Brooklyn. We had few desires not realized. We went to private Jewish schools. We spent summers in the mountains, first at a resort hotel, then in eight week sleepaway summer camps. We went to Broadway shows and operas. For themselves, Kopel bought a new car, usually a Buick, every five years. Sylvia received jewelry for special occasions and had charge cards at several department stores. A dishwasher was installed in the kitchen, as well as air conditioners built into the brick facade instead of hanging out our windows. They employed a full-time housekeeper/cook.

Sylvia and Kopel were not the idyllic couple one often reads about in posts from children or views on 1950s situation comedies. They were real people. They argued. They were strong-willed. They were opinionated. They had faults—Sylvia smoked to excess; Kopel rarely entertained someone else’s original thought as a better way to do anything.

But the home and work environments they crafted for their children to grow up in were petrie dishes for a well-rounded successful life.

They instilled in us a commitment to social values of equality, charity, along with individual and collective responsibility for the welfare of others not as fortunate. They role-modeled financial prudence. We were not treated as privileged. We worked when needed in their factory, or in our uncle or aunt’s retail stores. Each week we rotated household tasks including shopping, vacuuming and cleaning the kitchen.

We learned leadership practices through their examples of respect for their employees and customers, how to inspire support for community goals, how to build trust through shared experience.

Their home was always open to friends, ours and theirs, and relatives. They taught us to be gracious hosts, never imposing a limit on how many could enter 1810 Avenue W. We absorbed many lessons around nightly full-family three course dinners.

They demanded a return on their investment—excellence in school, part-time work while in college.

Perhaps their greatest gift was planting a sense of adventure and independence to ultimately pursue our personal and professional desires. We bravely traveled independently, domestically and internationally. We chose occupations foreign to the business model they undertook. We moved away, sometimes far away, from Brooklyn.

In the coming months, Bernie and Annette will celebrate their 53rd year of marriage; Gilda and I will hit 50 years; for Lee and David it will be 46 years. Our parents might not have been perfect, but they set a template worthy of devotion.