Charles III To Sit Upon a Stone 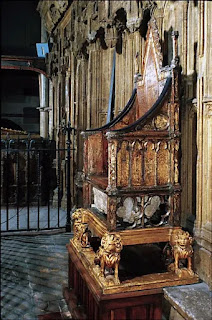 One of the more quaint customs to be witnessed with the investiture of Charles III as king of England, Scotland, Wales and Northern Ireland and the rest of the British Commonwealth will be his sitting on a weathered high-backed wooden chair atop a formidable piece of rock known as the Stone of Scone (pronounced Scoon).

Last used for Elizabeth II’s coronation in 1953, the stone has a history associated with the division and then unity of the British Isles under a single monarch.

Until nearly 1,000 years ago the Stone of Scone rested on the grounds of what is now known as Scone Palace near Perth, the one-time capital of Scotland.  Perth is 45 miles north of Edinburgh, the current capital. For the golfers among you, it is 34 miles west of St. Andrews.

Scone is the historic location where 38 kings of Scotland were crowned sitting on the Stone of Scone. Until 1296, when English King Edward I imprinted his subjugation of the Scots by taking the stone to London’s Westminster Abbey. It remained there except for just a scant few months, to be used for coronation ceremonies, until its formal return to Scotland, to Edinburgh Castle, in 1996. For Charles’ coronation the stone will be transported back to London (https://sparkypus.com/2020/05/26/the-coronation-chair-and-stone-of-scone/).

Gilda and I visited Scone Palace in 2019 and saw facsimiles of the famous stone and throne chair. Fore more than 400 years the the location has been the ancestral home of the Murray family, successive Earls of Mansfield since 1776. The palace was built from 1803-1812.

The first Earl of Mansfield, William Murray, was Lord Chief Justice of England. In 1783 he issued a ruling that began the process that led to the end of slavery in Britain.

As important as that action was, Hollywood found the life of his niece, Dido Elizabeth Belle Lindsay, more appealing. It filmed her life story, with liberties, in Belle, released in 2013 (https://en.m.wikipedia.org/wiki/Belle_(2013_film)#Plot).

Dido was the daughter of an enslaved African woman in the West Indies and Captain Sir John Lindsay, a Royal Navy officer. Lindsay entrusted her to Murray and his wife to raise, as they were doing with another great-niece, Lady Elizabeth Murray. When the two cousins matured they sat for an oil portrait by David Martin. The painting is displayed at Scone Palace.

Speaking of portraits, just days after Joe Biden was elected, I wrote that one of his first orders of business should be the formal unveiling of the portraits of President Barack and First Lady Michelle Obama to be hung in the White House, a  ceremony Obama’s successor failed to honor, no surprise given his boorish behavior. Well, it’s taken almost two years but the slight has been cleansed.

Cricket, Anyone? One of the more optimistic forecasts my eyes passed over recently was a prediction that cricket would “explode” in popularity in America (https://mol.im/a/11182649).

Gimmeabreak! While I know the British, as well as the Pakistanis, Indians and other countries influenced by English colonialism favor the sport, it is far too tame and longwinded for American tastes (https://www.topendsports.com/world/lists/popular-sport/sports/cricket.htm).

Cricket is even more sleep-inducing than soccer. Yes, Cricket has more scoring than soccer, baseball, hockey, basketball and football combined, but I cannot conceive the average American will become a fan beyond those who immigrated here from countries where cricket is a passion.