Filled my new car up with gas today after traveling 311.7 miles since the initial fill-up last Friday. Took 6.9 gallons, which comes to 45.2 miles per gallon.

Not bad, but nothing near the 133.7 MPGe from my first stop at a gas station. You see, my one-month-old car is a Ford Escape Plug-in Hybrid. Most days, I drive fewer than 40 miles tooling around town. I almost exclusively rely on battery power for those jaunts.

It was only after traveling to Massachusetts over the Thanksgiving weekend to celebrate the holiday, and more importantly our grandson Finley’s bar-mitzvah, that the gas engine kicked in full time. From the day I drove off the car dealership lot to last Friday, I logged 1,016 miles of battery and gas-engine power before topping off the tank with 7.6 gallons for a whopping 133.7 MPGe (miles per gasoline gallon equivalent).

Now, the colder it gets the less likely it will be that battery power alone will propel my Escape. Running the heater and other accessories drains the battery. Still, the prospect of fewer donations to Big Oil is comforting.

After each day’s trips around town I plug the Escape into a standard 120 volt socket in the garage. Replenishing the battery can take as long as 11 hours if it is fully discharged, a process during which I am usually asleep. 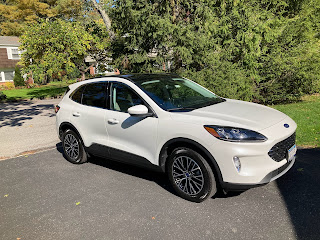